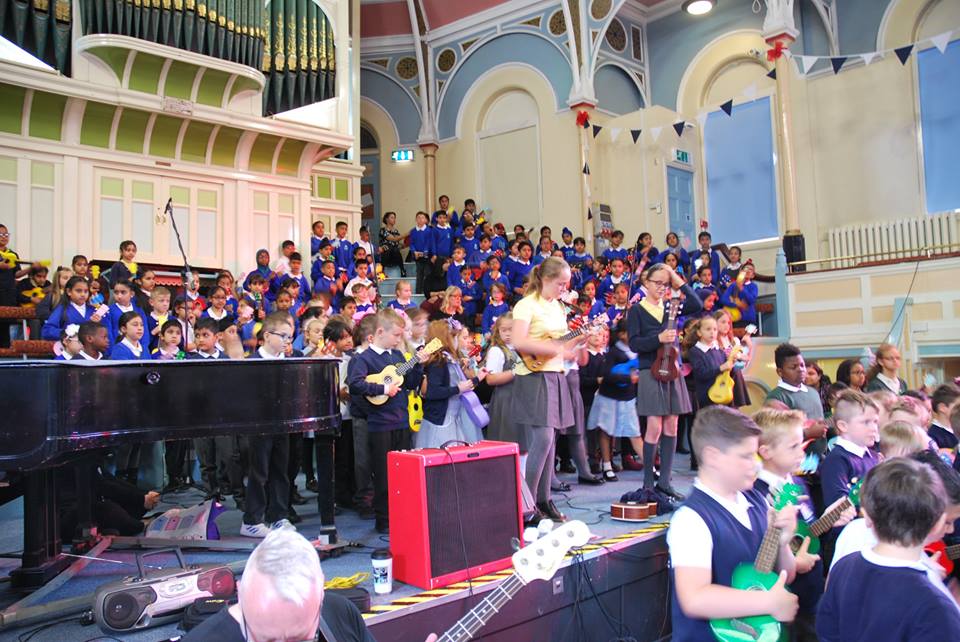 On Friday 9th June 2017 ‘Rockulele!’ took place at West Bromwich Town Hall. It involved around 400 children from 9 Sandwell Schools aged between 6 and 11 years old. Most were armed with ukuleles singing their hearts out and strumming in earnest over two concert performances all accompanied by a live band!

What could possibly go wrong?!

Well, very little as it turned out!

The date was set to coincide with the ‘BBC Music Day.’ But owing to a small thing called ‘The General Election,’ the BBC decided to change their date to the following week  – but we went ahead regardless! So no BBC presence but we did have a nice man from the Express and Star turn up to take photographs for a newspaper article so all was not lost.

The two concerts featured a variety of music being played and sung with ukuleles. Essential childhood favourites of ‘Twinkle Twinkle Little Star’ and slightly disgusting  ‘The Baby Bumble Bee,’ (spoiler: it doesn’t end well for the bee) the genre setting rock of Kings of Leon’s, ‘Use Somebody,’ toe –tapping rock ‘n’ roll of the 50’s in ‘Rock around the clock’ and more up to date pop of Sam Smith’s  ‘Stay With Me’.  In a section showcasing the music from World War 2 the Banjo ukulele came out to accompany ‘Run Rabbit Run’ (spoiler: please see above) amongst other well-known favourites. There was definitely something for everyone to enjoy while also demonstrating the versatility of this little instrument.

But there was more going on than just ukuleles…

Shireland Hall Primary School Choir came along for the evening concert to sing along with the ukuleles and perform three pieces on their own. The well-known Congolese ‘Si si si’ song was a highlight performed in multi parts. The audience also benefitted from an authoritatively described translation involving bananas and red hair?!

St Johns C of E Primary Academy also provided alternative entertainment with their Class Rock Band. All the instruments of a band – guitars, keyboards, drum kit and vocals split between 30 children – resulting in a performance of ‘A Horse With No Name’ by America, ‘Iko iko’ and the crowd pleasing ‘Cheap Thrills’ by Sia. The children made a great combined sound that made the songs immediately and authentically recognisable. All this at the tender, average age of 10 years old!

The sound of the concerts was greatly enhanced by the presence of a live band. This was an aspect that a lot of the children performing were very excited about. I think it’s very important for children to encounter ‘real’ people, not just so-called ‘stars’ on the tv, playing and performing at a high level in these events and as ever the band excelled!  While we’re mentioning ‘enhancement’ it’s worth noting the full venue PA set up carried out at a very professional level by SiPs staff to make the children and the band sound as good as they did. It helped fill the venue right to the back of the very expansive hall with a very polished sound.

We were fortunate to welcome the Mayor of Sandwell to the evening event. He seemed most happy to be there and apparently was particularly fond of the Sam Smith rendition of ‘Stay with me.’ So there you go!

Initial feedback from school staff and audience has been entirely positive. By all accounts the Year 2 children (6 and 7 year olds) were keen to get there early – 3 hours early! Afterwards they were declaring it “…best day EVER” to their teachers! Audience members that were involved with the schools performing have said that the sound produced was “pure and special,” praise indeed.

It was an event that involved a lot of hard work for the performers to learn the repertoire from memory as they did, but ultimately was enjoyable and quite the spectacle!

Roll on…or should I say ‘Rock on,’ the next one! 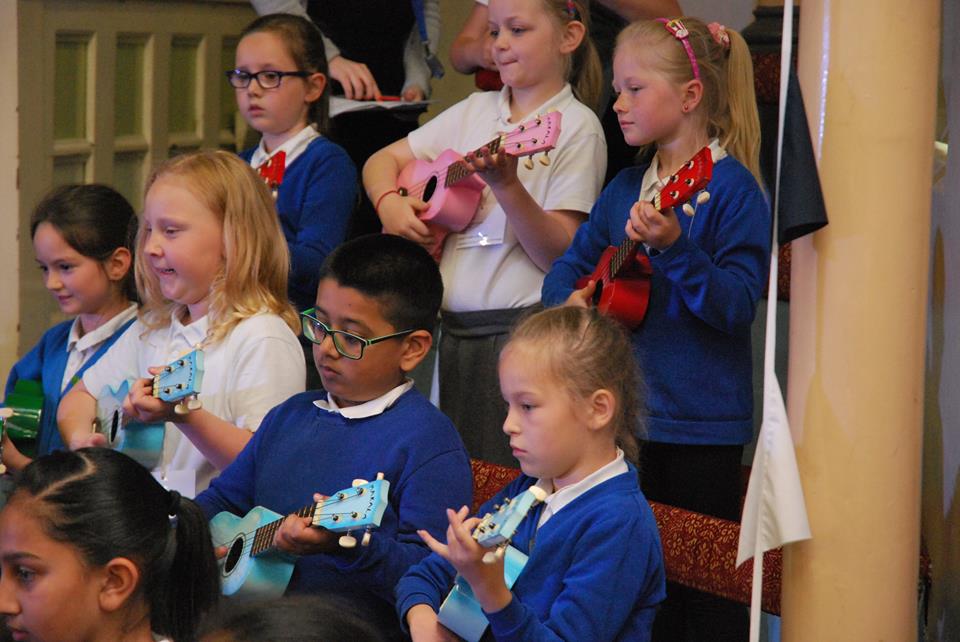 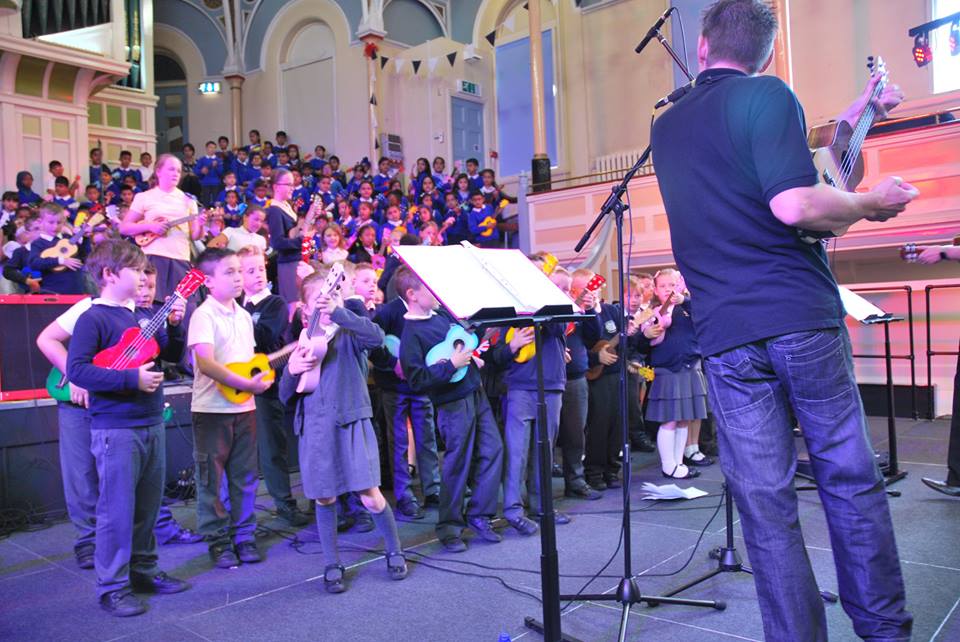 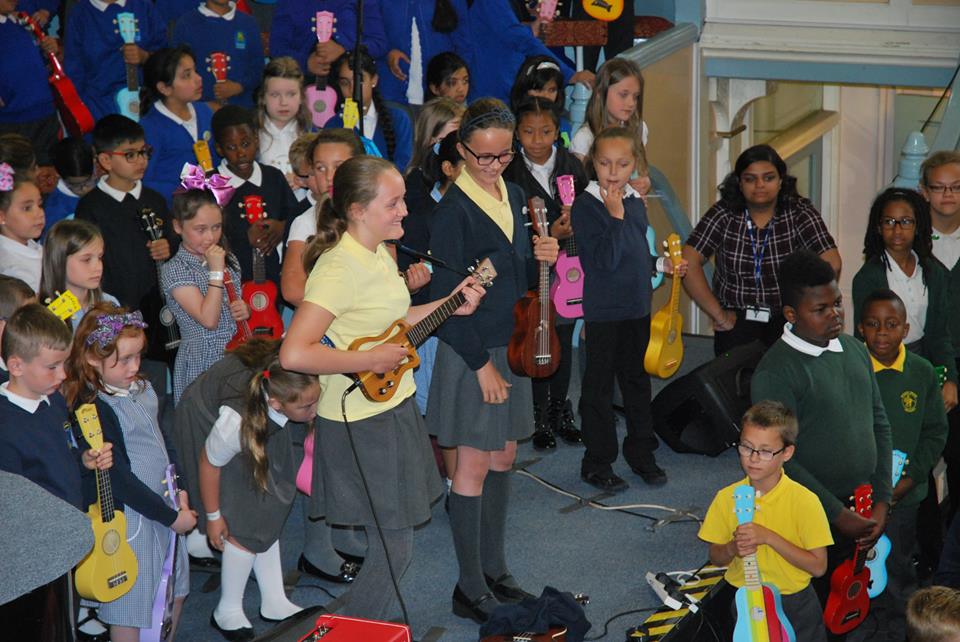 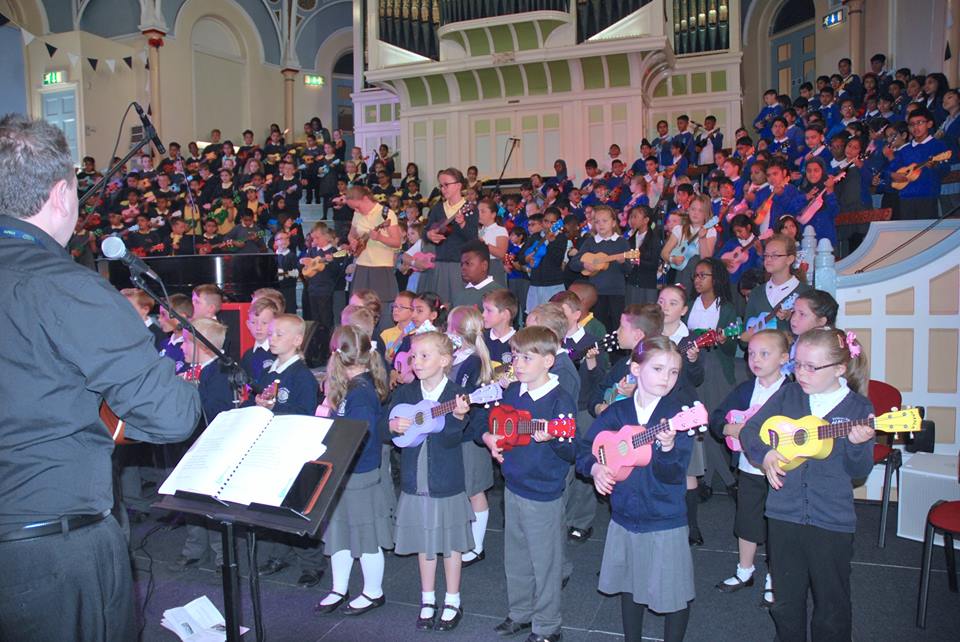 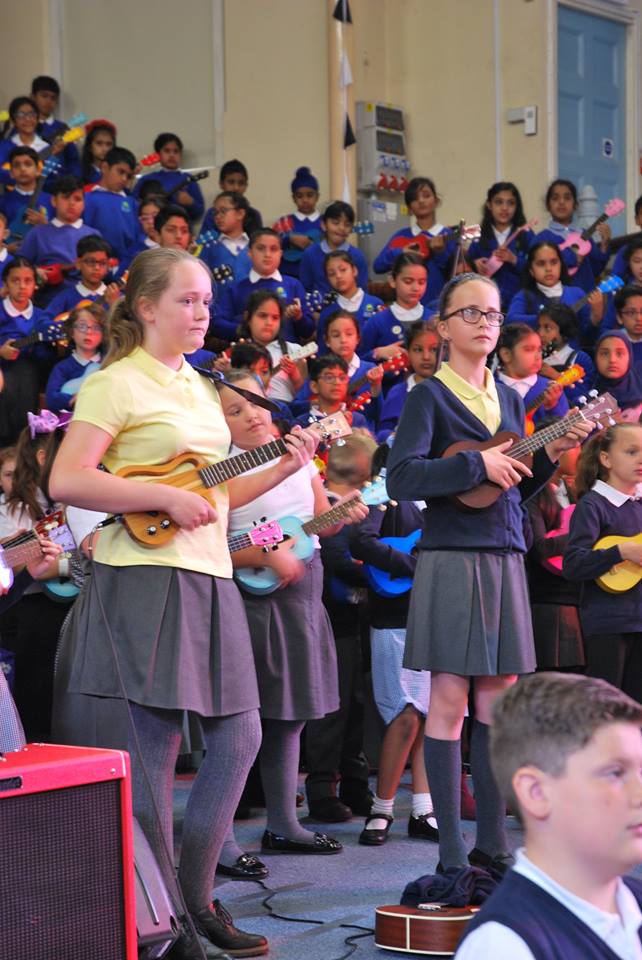 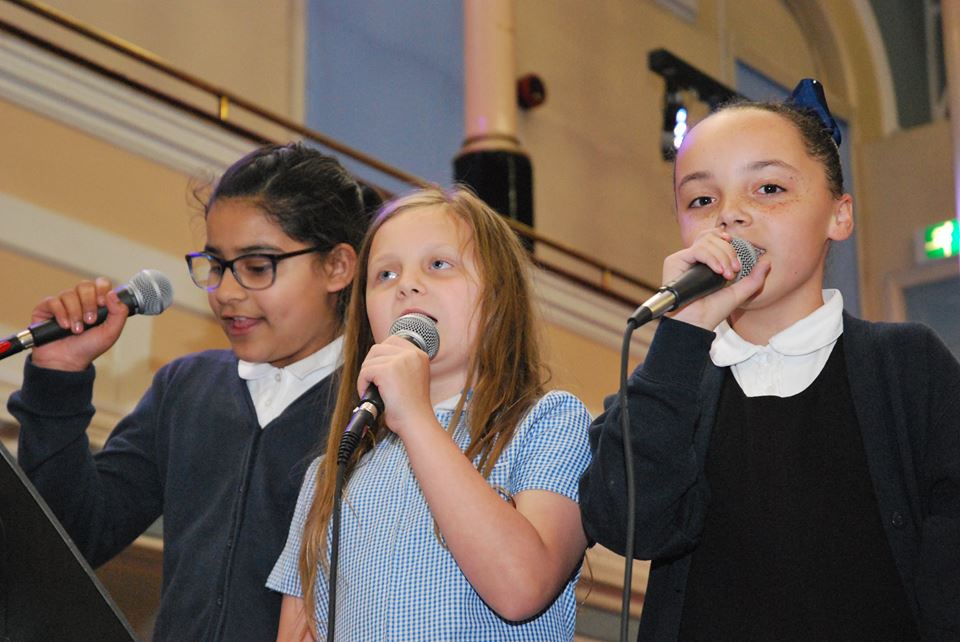 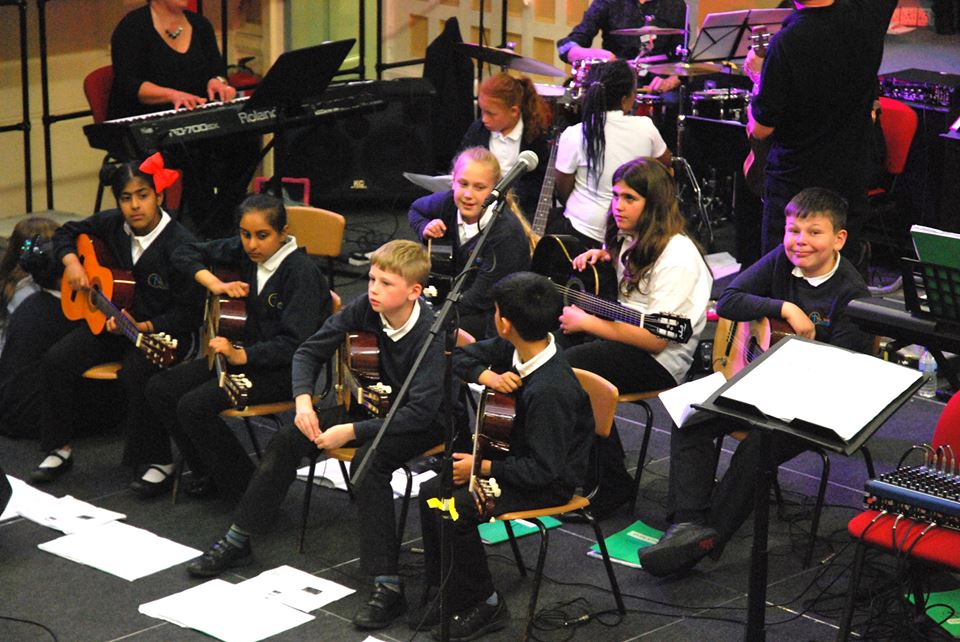 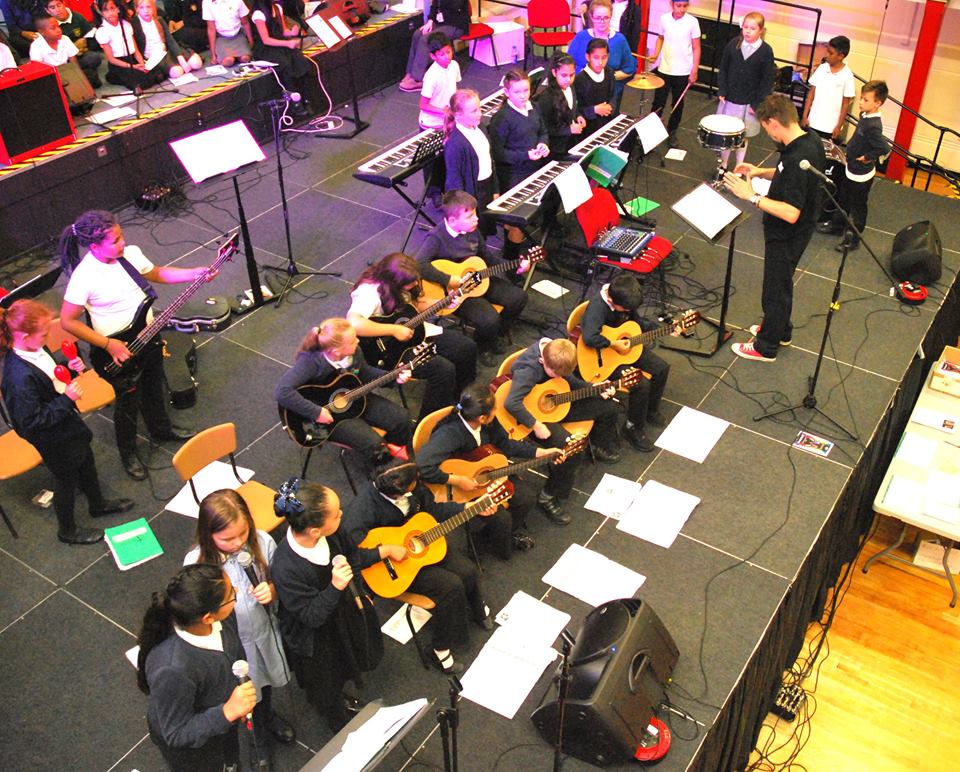 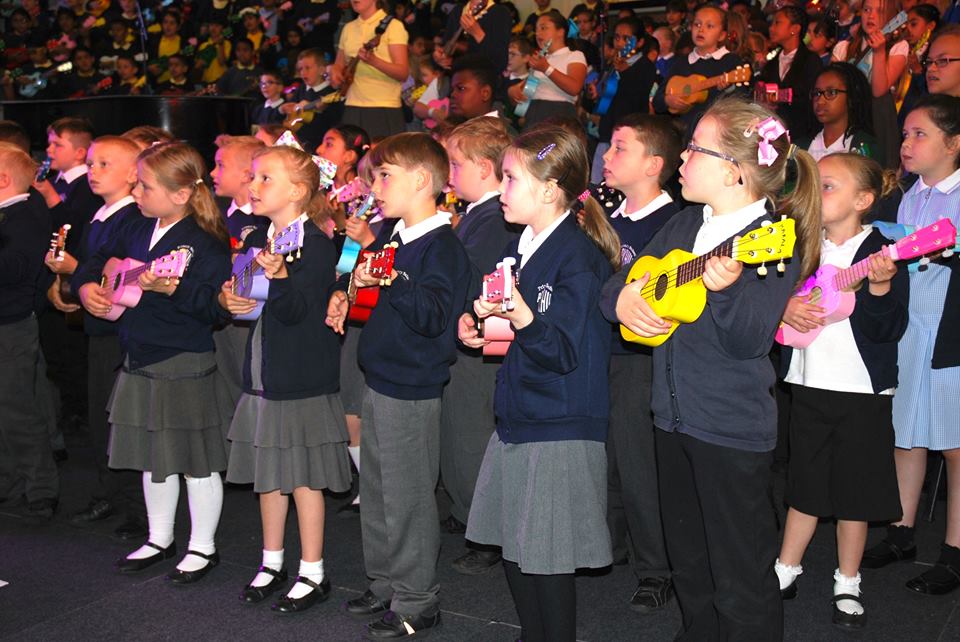 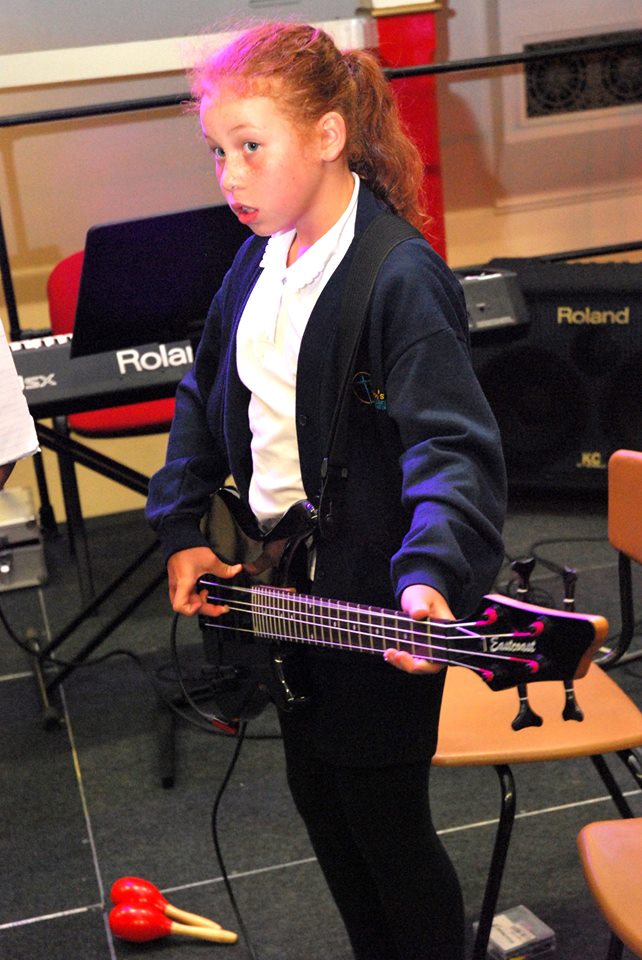